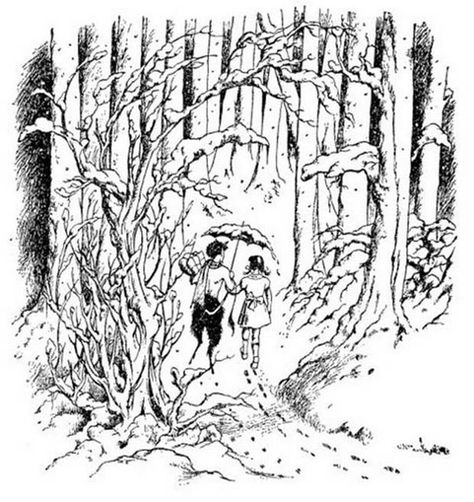 “Always winter and never Christmas.”[1] You may be familiar with this idea; it is from C. S. Lewis’ The Lion, the Witch, and the Wardrobe. It is the sad reality Mr. Tumnus expresses to Lucy. Under the rule of the White Witch, Narnia is trapped under a perpetual winter – and it is a winter without Christmas. Maybe, as you consider that idea, you are struck by its relationship to redemptive history (i.e., God’s work throughout all of history in order to bring us redemption). Lewis was not coining a fantasy world completely detached from the real world; rather, he undergirded the world of Narnia with great insight and truth from how God has made the world and how sinful men operate in that world. There is a real curse, and there was a time when it was “always winter,” so to speak, and never Christmas. And even now, it seems as though it is still winter and never Christmas. It is as though the spell of the White Witch plagues our own world.

In fact, something quite similar does. Except it is far worse than her spell. It is sin and death which plague our world, which is subject to the curse. And I’m guessing you’d agree that winter is better to sin, death, and curse any day! Under the White Witch’s spell, the world was trapped in perpetual ice, snow, and cold. Under the curse of creation, however, there is pain in childbirth, thorns, thistles, and difficult work. Yet, as the Narnian prophecy of the two kings and two queens to sit enthroned at Cair Paravel would end the Witch’s power, so was there a prophecy in the curse of Genesis 3 that would end the power of the Serpent, the great Deceiver of old – that is, the Devil. Such was the promise nestled at the beginning of all the unrighteousness of men.

Ever since Genesis 3, when man fell, God’s people could rightly cry, “It is always winter and never Christmas!” The Virgin-born Seed, the God-Man who would crush the Serpent and reign in righteousness forever, was promised, yes. He was expected and anticipated, indeed. But He never came. He never came for a thousand years, nor for two thousand years, nor even for millennia. Eventually, God’s people were scattered. Eventually, 400 years of silence. Would not you also cry, “Is it always winter and never Christmas?”

But then, in Bethlehem as prophesied, a virgin gave birth to a Son. In the words of Mr. Beaver, “Aslan is on the move!”[2] And in the words of the great ancient hymn,

Let all mortal flesh keep silence and with fear and trembling stand! Ponder nothing earthly minded, for with blessing in His hand Christ, our God, to earth descendeth – our full homage to demand.

It may still have been winter – but in the bleak midwinter, Christmas arrived at last!

Perhaps these days, you are feeling a little discouraged. Inside churches and out in the world, it sure feels like winter is back. Christmas has come and gone. Yes, Christ came once, but the Seed was rejected and His kingdom has been withheld. Was victory truly won?

The truth is, winter is in many ways still around. In fact, the days keep getting shorter and darker. The church grows colder and colder. The world, recently, has been growing more and more hostile. Yet, let us not forget that it is not always winter and never Christmas. It has been Christmas already, and that is the joy of celebrating Christmas year after year. God is faithful; He keeps His covenant. From Genesis 3, throughout all Old Testament history, He did not forget about redeeming His people, but offered up His own Son. It is still wintery, but it is winter in the wake of Christmas. It is winter cast in light of the Righteous Seed. And so we are not without hope! Now that Christmas has passed, spring is on the horizon.

Will this winter ever end? Well, it may well be winter again tomorrow. But it will not always be winter. This year, we look not only to Christmas, but we must begin anticipating the next great holiday. Though commonly known as Easter, we could term it better Resurrection Sunday – for that is precisely what it remembers! We celebrate incarnation and resurrection. And around Resurrection Sunday often comes a change in weather. The snow and the ice begin to melt away; the sun shines upon green grass once again. Life returns to the world.

So let us take comfort. It is not always winter and never Christmas. It is winter, yes, but not forever. And Christmas has come – and it is coming again! And one day, it will always be Christmas and never be winter again, not ever! And what peace and rest that ought to bring to our weary souls. What a blessed meditation this holiday season to consider both incarnation and resurrection. Let us cry with the hymn writer,

And so, with pens on pause until the New Year, we bid you farewell for 2022. Merry Christmas! And happy New Year!