The Gospel According to Job: Answers to the Greater Questions 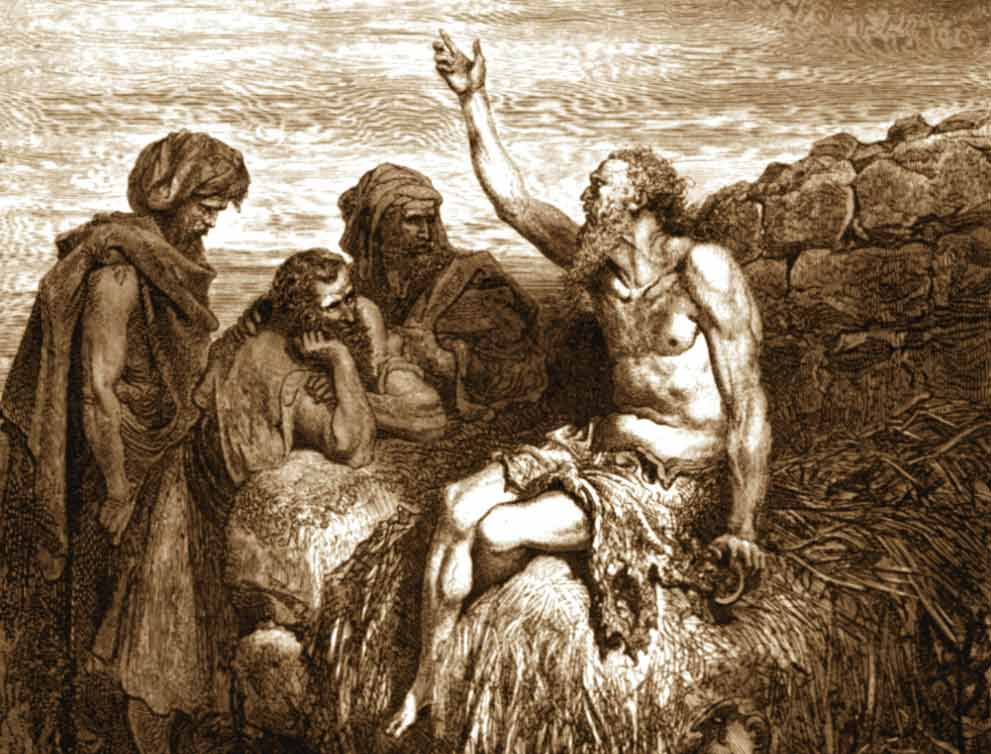 Having recently given our attention to the book of Job, it seems worthwhile to consider its contents a little longer before moving on. Of course, when we think of Job, the main question that looms in our minds is ‘why do the righteous suffer?’. This is Job’s great lament. His three friends offer simplistic, unnuanced, and unhelpful explanations, and while Elihu’s response seems more insightful, it also lacks compassion. God Himself ends the discussion not by providing an explanation or justification for the problem of pain, but rather by declaring His own sovereignty and wisdom. Thus, the answer to suffering is faith, rather than full understanding – to know and trust God, rather than to comprehend everything He is doing; to worship, not to solve.

However, there are two other questions in Job that, in fact, reach far beyond suffering. Two other problems are stated with even greater implications than temporal pain. And by God’s grace, we are given answers. And the solution, if apprehended, can even eclipse the sorrow of suffering, as difficult as suffering may be.

The first question is ‘how can a man be in the right before God?’, and the second question is ‘who can bring a clean thing out of an unclean?’ These are actually the greater questions in Job because the implications are eternal, rather than temporal. Let’s look at each one in turn.

How can a man be in the right before God?

This is Job’s first greater question, which he asks in chapter 9, verse 2, but it is introduced by Eliphaz at the beginning of the friends’ speeches (4:17) and finally restated again by Bildad to conclude the friends’ speeches (25:4). It is important to see that the problem is not solved by Job’s integrity – although he maintains his blamelessness throughout the book, and even foolishly contemplates arguing his case before God (13:3), in saner moments Job innately understands that his relative uprightness is not adequate to stand face to face with a holy God. He acknowledges, “[t]hough I am in the right, my own mouth would condemn me; though I am blameless, he would prove me perverse” (9:20). Job’s problem is man’s basic problem – man’s righteousness cannot approach God’s holiness. If even a righteous man like Job attempts to approach God based on his own merit, Job correctly confesses to God, “I know you will not hold me innocent. I shall be condemned” (9:28-29). Thus, Job laments concerning God, “he is not a man, as I am, that I might answer him, that we should come to trial together” (9:32).

However, even while Job laments the problem, he expresses longing for the solution:

“Would that there were an arbiter between us, who might lay his hand on us both.” (9:33, ESV footnotes)

In this Spirit-inspired insight, stated as a longing, Job sees that what is needed is a mediator who can lay hands on both sides of the schism, one who can hold both divinity and humanity together. But while this vision seems surprising, Job’s foresight goes further still, as foreshadow and faith find each other in the following expression of faith a few chapters later:

Amazingly, Job expresses faith and hope in a heavenly witness who would testify on his behalf with God. Like a son of man argues directly with a man, this divine advocate speaks directly and on equal footing with God. A mediator who reconciles God and man… what is His name?

Who can bring a clean thing out of an unclean?

This is the second greater question, and Job asks it in chapter 14, verse 4. Although he begins by answering the question negatively, saying “[t]here is not one”, his faith then begins to open the door for the possibility of a more positive solution. This is the same pattern we saw with the first greater question – lament gives way to longing, and then to faith and hope. In the context of chapter 14, the unclean is death, and the clean thing is life after death. Yes, in a greater biblical context, the unclean is sin, but death is the product of sin, and so death is the ultimate unclean thing. That death is in view here becomes clear as Job compares man’s fate to a tree: “For there is hope for a tree, if it be cut down, that it will sprout again, and that its shoots will not cease. Though its root grow old in the earth, and its stump die in the soil, yet at the scent of water it will bud and put out branches like a young plant. But a man dies and is laid low; man breathes his last, and where is he?… so a man lies down and rises not again; till the heavens are no more he will not awake or be roused out of his sleep” (14:7-12). Thus, the problem is death, and the question, ‘who can bring a clean thing out of an unclean?’ seems to be answered at first with a degree of despair – there is no life after death for man… or is there?

Once again, Job surprises us by moving from despair to desire for a solution that paves the way for true faith and hope:

“Oh that you would hide me in Sheol, that you would conceal me until your wrath be past, that you would appoint me a set time, and remember me! If a man dies, shall he live again? All the days of my service I would wait, till my renewal should come. You would call, and I would answer you; you would long for the work of your hands… my transgression would be sealed up in a bag, and you would cover over my iniquity.” (14:13-17)

Job, superintended by the Spirit, desires a day when God’s wrath would be over, when his sin would be atoned for, and then, at some distant future date, God would call him back from the dead to a renewed life. Once again, this heartfelt longing grows into full faith and hope a few chapters later, as Job ardently anticipates his resurrection:

“For I know that my Redeemer lives, and at the last he will stand upon the earth. And after my skin has been destroyed, yet in my flesh I shall see God, whom I shall see for myself, and my eyes shall behold, and not another. My heart faints within me!” (19:25-27)

This looks forward to physical life after death, resurrection, in the future when man will behold his Redeemer on earth on the last day. A Redeemer who raises the dead… what is His name?

What is His name?

Of course, diligent students of Scripture will have already answered this question from the New Testament. But before going there, let’s look at one more passage later in Job to find a surprising solution on the lips of an unlikely prophet – Elihu. Reflecting on the plight of man who is doomed to die, the fiery young preacher proclaims:

“If there be for him an angel, a mediator, one of the thousand, to declare to man what is right for him, and he is merciful to him, and says, ‘Deliver him from going down into the pit; I have found a ransom; let his flesh become fresh with youth; let him return to the days of his youthful vigor’; then man prays to God, and he accepts him; he sees his face with a shout of joy, and he restores to man his righteousness. He sings before men and says: ‘I sinned and perverted what was right, and it was not repaid to me. He has redeemed my soul from going down into the pit, and my life shall look upon the light.’” (33:23-28)

This extraordinary passage brings together the answers to both greater questions into one unified, personified solution. How can a man be in the right before God? Who can bring a clean thing out of an unclean? There is a messenger from God, reasonably inferred as the angel of the LORD, who is a unique, one-of-a-thousand mediator and advocate, who is a true witness, an agent of mercy, who will provide a ransom, a redemption payment – indeed, a propitiation - such that man is to be counted righteous and acceptable to God, and redeemed from the grave, resurrected to life. This is nothing less than the Gospel according to Job. And what is His name?

“For there is one God, and there is one mediator between God and men, the man Christ Jesus, who gave himself as a ransom for all, which is the testimony given at the proper time.” 1 Timothy 2:5

“But if anyone does sin, we have an advocate with the Father, Jesus Christ the righteous. He is the propitiation for our sins, and not for ours only but also for the sins of the whole world.” 1 John 2:1b-2

“But now the righteousness of God has been manifested apart from the law, although the Law and the Prophets bear witness to it – the righteousness of God through faith in Jesus Christ for all who believe. For there is no distinction: for all have sinned and fall short of the glory of God, and are justified by his grace as a gift, through the redemption that is in Christ Jesus, whom God put forward as a propitiation by his blood, to be received by faith. This was to show God’s righteousness, because in his divine forbearance he had passed over former sins. It was to show his righteousness at the present time, so that he might be just and the justifier of the one who has faith in Jesus.” Romans 3:21-26

“Jesus said to her, ‘I am the resurrection and the life. Whoever believes in me, though he die, yet shall he live, and everyone who lives and believes in me shall never die. Do you believe this?’” John 11:25-26