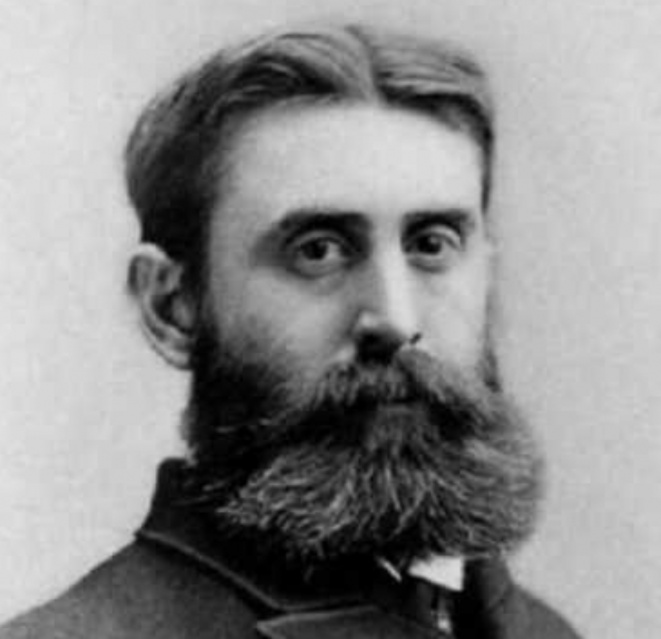 In the 19th century, biblical authority was under attack. Liberalism was making inroads among most of the major denominations. Many of America’s seminaries had been compromised by unbelieving scholarship. But in the midst of this opposition, God raised up a man who would defend the truth of Scripture.

Benjamin Breckinridge Warfield was born on November 5, 1851. Throughout his childhood, Warfield’s parents were committed to providing him a quality home education. He was trained in the classical languages, including Greek. This foundation served him well as he went on to become one of the leading biblical scholars of his day.

Warfield entered Princeton University in 1868, graduating in 1871 with high honors. Desiring to go into the ministry, he later studied at Princeton Seminary from 1873-1876.

Warfield preached at churches in Ohio, Kentucky, and Maryland, and afterwards accepted a call to help train pastors, first at Western Seminary and eventually at Princeton Seminary, his alma mater.

In 1881, Warfield published with A.A. Hodge an article in The Presbyterian Review defining and defending the doctrine of Biblical Inspiration. Throughout his life, Warfield published many more writings on this topic, thoroughly answering the objections of unbelieving higher critics. Intellectually, Warfield was a force to be reckoned with. As Fred Zaspel notes, “He could enter the fray at any point and he would own the discussion, whether it was Old Testament studies, New Testament studies, theology, church history, or philosophy.”¹

But even though Warfield was a diligent scholar and faithful apologist, in this article I wish to draw particular attention to Warfield’s life as a tender husband.

In 1876, B.B. Warfield married Annie Pierce Kinkead, and shortly thereafter the couple left for Germany so Benjamin could pursue further theological studies. It was there that the two newlyweds were overtaken by a severe thunderstorm, where Annie was either directly or nearly struck and suffered lifelong chronic ailments as a result. O.T. Allis, a graduate of Princeton Seminary who studied under Warfield, recounts that:

“It was such a shattering experience for Mrs. Warfield that she never fully recovered from the shock to her nervous system and was more or less of an invalid during the rest of her life. I used to see them walking together and the gentleness of his manner was striking proof of the loving care with which he surrounded her. They had no children. During the years spent at Princeton, he rarely if ever was absent for any length of time. Mrs Warfield required his constant attention and care.”²

“I have faint recollections of her walking up and down in front of the house in the early years of my Princeton life, but even that diversion has long been denied her… Dr. Warfield used to read to her during certain definite hours every day. For many, many years he has never been away from her more than about two hours at a time; it has been some ten years since he left Princeton.”³

Here was a man who had his priorities in order. Warfield was a much-sought speaker, receiving regular invitations to travel. Throughout his early years in ministry, he was able to speak abroad somewhat, but those plans were always dependent upon the ebbs and flows of Annie’s health situation. Warfield understood that his primary duty before God was to lovingly care for his wife. When her health declined, he spent more and more time at home with her.

But why would God bring such a painful providence into the Warfields’ life? How could God allow Annie to suffer so much, and why should a man of Benjamin’s gifts and abilities be tied down to a bedside when he could presumably be set loose to do much greater ministry work for God’s kingdom?

Warfield was a man who trusted in God’s good plan. Without resentment, he accepted this trial from the hand of his loving Heavenly Father. He saw the care of his wife as his ministry, and gave himself to it first and foremost. Only in eternity will we know the full reasons for Annie’s life of suffering, but two observations should be made for now:

D.L. Moody once remarked, “many people are willing to do great things for the Lord, but few are willing to do little things.” Yet in God’s economy, it is often the little things that turn out to be great. Not even a cup of cold water is without significance (Matthew 10:42). The answer to “where should I serve God?” is nearly always found in the people whom God has placed right in front of us, starting in our own families and then churches before expanding in concentric circles beyond.

Who has God placed in your path to minister to this week? The work of serving one another was not beneath Warfield’s dignity, and it should be a delight to us as well!