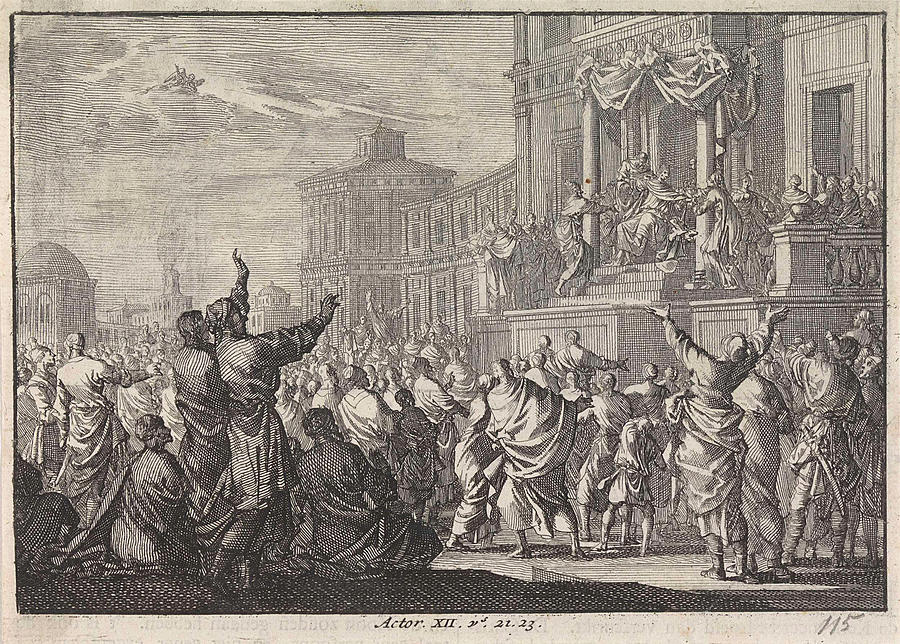 Last time, we saw that in answer to the church’s steadfast prayers for the Apostle Peter, whom Herod had locked up in prison until he could make a public example of him, the Lord worked a miraculous deliverance on Peter’s behalf, even sending His angel to rescue the apostle, both from his imprisonment and from “all that the Jewish people were expecting” (Acts 12:11). As we left off, Peter was standing dangerously exposed in the middle of the street, and we were left wondering what would become of him – and his archnemesis Herod. So having brought ourselves back up to speed with the narrative, let’s see how the story turns out.

“When he realized this, he went to the house of Mary, the mother of John whose other name was Mark, where many were gathered together and were praying. And when he knocked at the door of the gateway, a servant girl named Rhoda came to answer. Recognizing Peter’s voice, in her joy she did not open the gate but ran in and reported that Peter was standing at the gate. They said to here, ‘You are out of your mind.’ But she kept insisting that it was so, and they kept saying, ‘It is his angel!’ But Peter continued knocking, and when they opened, they saw him and were amazed. But motioning to them with his hand to be silent, he described to them how the Lord had brought him out of the prison. And he said, ‘Tell these things to James and to the brothers.’ Then he departed and went to another place” (Acts 12:12-17).

After Peter realizes what has happened, he goes to a place where he knows there will be believers gathered to pray for him. As knocks on the door of the house, a servant girl named Rhoda recognizes his voice, but in her excitement, she forgets to let him in and instead rushes into the prayer meeting to let the others know that Peter is at the door. The prayer warriors’ less-than-exemplary response gives us a feel for just how unexpected Peter’s rescue truly was. Apparently, nobody expected for his prayers to be answered – at least, not in such an unforeseen way – because when Rhoda told them the news, they all thought that she must have lost her mind; they seem more willing to believe that Peter’s angel is at the door than to accept the fact that God actually answered their prayers. One can only imagine their surprise when they finally opened up the door only to see Peter standing there. After explaining how the Lord brought him out of the prison, he told them to pass along the news to James and the rest of the brothers and then departed for another place, signalling the start of a new scene.

“Now when the day came, there was no little disturbance among the soldiers over what had become of Peter. And after Herod searched for him and did not find him, he examined the sentries and ordered that they should be put to death. Then he went down from Judea to Caesarea and spent time there” (Acts 12:18-19).

As morning dawns, the soldiers are in for a rude awakening as they realize the prisoner is missing. After searching everywhere for him, Herod orders that the guards be put to death (according to Roman law, if a guard were to lose a prisoner, he would be liable to the same penalty as that prisoner) and then decides to take some vacation time down in Caesarea, perhaps to enjoy a good sulk after suffering the embarrassment of losing Peter. In any case, we see that Herod’s plans have been frustrated; “He who sits in the heavens laughs” (Psa. 2:4).

“Now Herod was angry with the people of Tyre and Sidon, and they came to him with one accord, and having persuaded Blastus, the king’s chamberlain, they asked for peace, because their country depended on the king’s country for food. On an appointed day Herod put on his royal robes, took his seat upon the throne, and delivered an oration to them. And the people were shouting, ‘The voice of a god, and not of a man!’ Immediately an angel of the Lord struck him down, because he did not give God the glory, and he was eaten by worms and breathed his last. But the word of God increased and multiplied” (Acts 12:20-24).

In order to understand what is going on here, we must go back a few chapters to Acts 5, where we meet a teacher of the law named Gamaliel, who provides some theological context that helps us understand the reason for what happens to Herod. Remember the context: after a series of events similar to what takes place in Acts 12 (the Apostles are arrested, put in public prison, and let out by an angel of the Lord), the Apostles are again arrested and brought before the Sanhedrin, which clearly wants to kill them; then Gamaliel, a man held in honour by all the people, stands up to speak a word by way of caution. Basically, he tells them not to have anything to do with these men, for if this undertaking be of man, it will fail, but if it be of God, then they will not be able to overthrow it – they might even be found opposing God.

With that in mind, what happens to Herod at the end of Acts 12 should start to make sense. By going after the church, Herod is effectively opposing God. This becomes explicit when he shows the audacity to receive worship from the people, something the Apostles never do (Acts 10:25-26; 14:11-18), thereby erecting himself as a god. But as Herod finds out (albeit the hard way), he is no match for the God of the church, and immediately an angel of the Lord strikes him down. And with that, we observe two contrasts that Luke draws, first between the Apostle Peter and Herod, and second between Herod’s decease and the Word of God’s increase.

First, we see that both Peter and Herod are struck by an angel of the Lord, but not to the same effect. When the angel strikes Peter, it is to rescue him from the hand of Herod; but when he strikes Herod, it is to execute divine judgement upon him. And from this, a powerful contrast emerges – the Lord protecting and preserving His people, while His enemies fall down before Him. Second, we see that in contrast to Herod, who is eaten by worms and breathes his last, the Word of God is living and active (Heb. 4:12) – it continues to increase and multiply. Forming something of a conclusion to this entire chapter, these words remind us that no human ruler can ultimately suppress the truth of God’s Word. The gospel must finish its course – it must extend to the uttermost parts of the earth (Acts 1:8).

As we reach the end of Luke’s story, let’s be encouraged. Though afflicted in every way, we are not crushed; and though struck down, we are not destroyed (2 Cor. 4:8-9). With the Lord on our side, there is no opposition that can ultimately overcome the church. God’s Word will continue to make a difference in the world for Christ, and the gospel will continue to make its way to the ends of the earth. The church and the gospel that it proclaims must prevail in the end.

Finally, let’s be a church that is fervently committed to prayer. Remember, God answers our prayers, sometimes in the most unexpected ways, though not always in ways that we want. Prayer is the divinely appointed means by which the Lord has seen fit to carry out his purposes on the earth. We ought always to pray, knowing that in the Lo