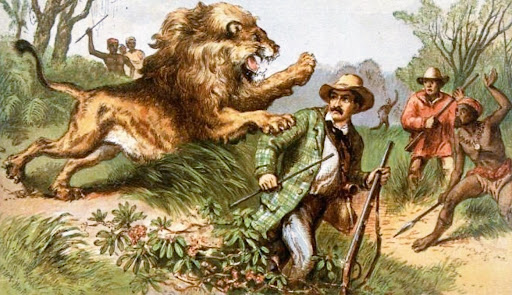 “I have seen, at different times, the smoke of a thousand villages—villages whose people are without Christ, without God, and without hope in the world.” The words were spoken by Robert Moffat, a pioneer missionary to South Africa, and they left a deep impression upon a young man named David Livingstone. The burden expressed in those words compelled Livingstone to open up much of Africa’s interior to the spread of the gospel.

"January 14, 1856. Evening. Felt much turmoil of spirit in prospect of having all my plans for the welfare of this great region and this teeming population knocked on the head by savages to-morrow. But I read that Jesus said: 'All power is given unto Me in heaven and in earth. Go ye therefore, and teach all nations, and lo, I am with you alway, even unto the end of the world.' It is the word of a gentleman of the most strict and sacred honour, so there's an end of it! I will not cross furtively to-night as I intended. Should such a man as I flee? Nay, verily, I shall take observations for latitude and longitude to-night, though they may be the last."

“It is the word of a gentleman of the most strict and sacred honour,” aptly summed up Livingstone’s trust in Christ’s promises.

At the start of the 19th Century, Africa was known as “the dark continent” due to its interior being largely unknown and unreached. Mission stations on the continent were basically confined to regions close to the coast. For Livingstone, this state of affairs was unacceptable. The gospel ought to reach–indeed it must reach–the farthest ends of the earth, including the interior of Africa. Reformed in his theology, Livingstone was convinced that Christ would call out a people for Himself from every tribe, language, and nation. But Livingstone’s confidence was in biblical predestination–not fatalism. He knew that the Africans could not hear the gospel without a preacher (Romans 10:14.) And so, armed with a rock-solid conviction of the gospel’s inevitable success, Livingstone made it his life’s work to prepare the way for missionaries who would come after him. “The end of the geographical exploration is the beginning of the missionary enterprise,” said Livingstone.

This geographical exploration was no easy task. Throughout his journeys, Livingstone walked over 29,000 miles through dangerous, uncharted territory. He faced hostility from slave traders opposed to his work. He was abandoned by traveling companions and guides. He became ill with such tropical diseases as malaria, eating ulcers, and dysentery. Famously, he was attacked by a lion, bearing lifelong scars and losing much function in his left arm. Even his hearing and eyesight were greatly damaged by illnesses and injuries sustained during his travels. And yet, he pressed on, charting and opening up nearly a million square miles of Africa’s interior.

Livingstone walked by faith, not by sight. He was determined to work for a harvest that he would not see in his own lifetime, writing,

“Although I see few results, future missionaries will see conversions following every sermon. May they not forget the pioneers who worked in the thick gloom with few rays to cheer, except such as flow from faith in the precious promises of God’s Word.”

In 1873, after nearly three decades of exploration on the African continent, Livingstone was finally overcome by severe malaria and dysentery. He died in Chitambo, in what is now Zambia. Following his death, Livingstone’s heart was cut out and buried in Africa. Natives embalmed and carried the rest of his body over a thousand miles until it was loaded onto a British ship, finally being laid to rest at Westminster Abbey. There Livingstone’s burial stone is engraved with a precious promise of Christ, found in John 10:16:

“AND OTHER SHEEP I HAVE, WHICH ARE NOT OF THIS FOLD: THEM ALSO I MUST BRING, AND THEY SHALL HEAR MY VOICE.”

Though Livingstone did not see much fruit in his own time, thousands of missionaries poured into Africa’s interior in the years after his death. With their way prepared, they preached the gospel faithfully, and by the power of the Holy Spirit, many sheep heard the Shepherd’s voice, and were brought into Christ’s fold. This “gentleman of strict and sacred honor” was true to his word!

If there is one lesson we must learn from the life of Livingstone, it is that faithfulness is more important in God’s economy than immediate, visible results. Don’t be discouraged if you don’t see fruit right away. Just be faithful in the work set before you. God will take care of the results. A life of service to Christ is never wasted:

“Therefore, my beloved brethren, be steadfast, immovable, always abounding in the work of the Lord, knowing that your labor is not in vain in the Lord” (1 Corinthians 15:58).